​My Reflection:
Which location and time period did you choose to represent in your trebuchet design? How does your trebuchet represent this location and time period?
My group chose to build a trebuchet that took place in 13th century Mongolia. It represented this time period and location because, it had brick wall pictures pasted on the side of the wood to look like a wall from back then, it also had a couple of old paintings of horses with men riding them also pasted on the wood of our trebuchet.
​
The 21st century skills involved in this project were creativity, collaboration, critical thinking and communication. Which of these skills do you feel was your strongest soft skill during this project? Which do you feel was your greatest area of growth?
I feel like the 21st century skill that was my strongest during this project was communication.  During the building stage of our trebuchets I communicated a lot with my two group members to see what needed to get done and what I could do. I have two skills that I feel could be my greatest area of growth, and they are, creativity and collaboration. We did have a decent design for our trebuchet, it could have been more refined but we did only have around 3-4 days to build them. We could have made the wood pieces more equal to a 1 to 3 proportion, and there are other small things that we could have fixed to make it not only work better, but look better. Also, we could have worked on the creativity of representing our time and location better. That was one of the least refined areas. We simply printed out a couple pictures of a brick wall and horse and then we taped on not very neatly on the sides of the wood. I took away from the design and I thing failed to represent Mongolia in the 1300's. Moving on, other aspect my group could have worked on was, collaboration. We did talk through many things throughout the project, but once we got to building, one of the members in our group  sort of took over. They started building by themselves, didn't explain his idea very clear and as a whole group we did not equal out the work. My other partner and I sat around most of the work time not knowing what to do since we couldn't decorate it since our partner was building and he didn't really want us to help build it. As a group, I definitely think that was one of our biggest areas of growth and improvement.
My Trebuchet 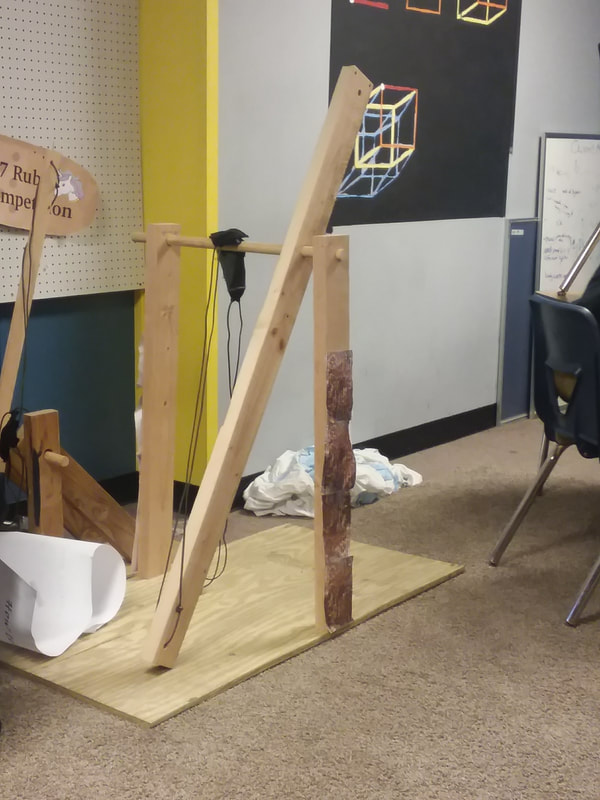 ​ My Reflection:
My group’s Rube Goldberg demonstrated multiple simple machines. Three main ones are, inclined plane, pulley and wheel and axle. Most of our rube was made up of tracks for the car’s, and these tracks would be considered incline planes. The toy cars we used as hot wheels demonstrated a wheel and axle. The tires are the wheels and as for the axle, it is the beam between the two wheels that help them turn. Last, an example of a pulley would be in my step, which was the first one. I used a pulley to pull up a piece of wood so that a car would start rolling down the track.
Our rube also demonstrated three principles which are potential energy, kinetic energy and inertia. I used all three of these in my two steps. When my car was sitting on the wood waiting for it to be pulled it was potential energy. Once the pulley was pulled and the car started to roll down the inclined plane, it was using kinetic energy. And last, inertia was used when the car kept rolling normally until it was affected by an outside source, which in this case was a jar that the car fell into stopping it.
I was given two problems, one was to calculate potential energy, and the other was to calculate for kinetic energy. Here is the first problem: In Order to start your rube goldberg, you drop a 7.0 gram steel ball 50 centimeters into a bucket with a pulley system. I use this information to find out the potential energy.
Potential Energy (Joules) = Mass (m) x Gravity (g) x Height (h)
PE = potential energy
m = 7.0 grams = 0.007 kg
g = 9.81 m/s2

In this project we started out by drawing two different cartoons. To help come up with ideas, I looked at multiple videos on youtube. While watching them, I found things that I liked and thought was cool. That was when I started to plan out ideas for my design. Next, we got together with a small group and we each drew out our first design for our steps. After, we grouped up with our final groups and started to refine our ideas. The last step we took to finish our design process was, combining all of our final steps into one drawing so could analyze it and make sure that it not only looked good, but also that it flowed from step to step.
I definitely used most if not all of the 21st Century Skills throughout the project, but I feel like the one I showed and used the most was collaboration. All throughout the project, I had to collaborate with all of my group members to make sure they planned our their steps, refined them and was ready to build them. An example of when I collaborated with my group was in the beginning of the building process. I collaborated with everybody to finalize their steps, draw our entire rube out and then make a list of materials we needed. This took the entire group collaborating and communicating so that we were able to be successful when we started to build our steps and mount them on to the base.
Even though I did use all of the 21st Century Skills during this project, that doesn’t mean I don’t have any areas of growth within a few of them. I feel like the one I can grow in and improve on the most is critical thinking. It did take a lot of thinking when I was planning my section of the rude, but I feel like I could have improved and refined it, as well as possibly adding more to it. A time where I could have used more critical thinking was when I first started to plan out my ideas. I went through with my first initial idea, but I could have made up a whole new design and then maybe combined the two. There was multiple times when my groupmates asked me for help, for example, throughout the weeks before exhibition one of my groupmates asked me to help them make it so their step was consistently working. I didn’t think about things we could change in the step to make sure that happened, I just tried to fix the problem with the materials they already had there. Because of that, we didn’t reach our goal of getting it to work at least 99% of the time. It wasn’t just in this step either, it was through out my group’s entire Rube Goldberg final product.